The over-arching aim of the project is the establishment of a high quality, comprehensive and culturally appropriate facility which supports Aboriginal Elders and enables community involvement and cohesion. The Hub will be on Noongar country, built and managed on an ongoing basis by the Noongar community. This project has a unique integrated nature which includes a culturally appropriate Aboriginal aged care facility combined with an inclusive and resilient community hub, which provides culturally responsive and appropriate care and recognizes the senior community members and their importance to Noongar wellbeing.
The project will offer increased accessibility and availability to culturally safe and essential clinical services for Aboriginal Elders. The project is sensitive to the community concerns about the current aged care arrangements/provisions and the trauma for Aboriginal Elders who were part of the stolen generation who faced institutional abuse and racism, re-traumatized by racism in mainstream aged care organisations and re-living the trauma many faced in their youth while in institutional care (Polascheck 1998; Ramsden 2002).

For Noongar woman Alice Riley, the death of her life partner nine months ago was a devastating blow.

The pair had spent four decades together looking after grandchildren and great-grandchildren in Perth’s eastern suburbs.

“In October will be twelve months. It just feels like I’m lost … it’s a big downfall for me,” she told SBS News.

Ms Riley still keeps an open door for her large extended family, but her generosity leaves her without food and money of her own.

It’s a concern for the nearby Jacaranda Community Centre, a not-for-profit organisation supporting Aboriginal families.

“Nan Alice has been the one that grandchildren and great-grandchildren turn to,” the centre’s CEO Lyndsey Fitzgerald said.

“The issue is people don’t see it as financial abuse … they line up at the bank when Nan Alice goes to get her pension.

The intersecting issues of poverty, homelessness, grief and trauma demonstrate the challenges of providing support to a person of Ms Riley’s age and identity.

“Because she’s been able to keep a home, the family members come here because it’s a safe haven. Many of them have nowhere else to go, they don’t have homes of their own,” Ms Fitzgerald said.

Ms Riley welcomes them with open arms, but the overcrowding at times brings substance abuse and anti-social behaviour.

“I don’t mind helping the family because we’re all grieving, but the main thing with these kids is the drug world, it’s too free,” she said.

“It’s only when they’re on the drugs that they come to me more … I don’t mind helping them.”

Ms Fitzgerald has searched for appropriate aged care services that could visit Ms Riley, to check on her health and wellbeing. But she says there simply aren’t quality services available, equipped with the cultural literacy to support Ms Riley and understand her role in the family.

“There are services that she needs, but they need to be appropriate. They need to understand the family,” Ms Fitzgerald said.

“You just can’t put a generalist, white service in there, it’s not going to work.

But across the country, more than 60 per cent of Aboriginal and Torres Strait Islander people live in major cities or inner regional areas.

In his address to the commission on Monday, professor of geriatric medicine at the University of Western Australia Leon Flicker said rates of engagement with aged care services among Indigenous Australians were only marginally better in metropolitan areas.

“There’s quite a literature about this, that merely having availability doesn’t mean that people access the services,” he said.

“Aboriginal people in urban centres often access services poorly for a number of reasons and it may not be much better in urban centres than it is in rural and remote areas.” Averil Scott said a lot of aged care places don’t provide a connection to Aboriginal culture. 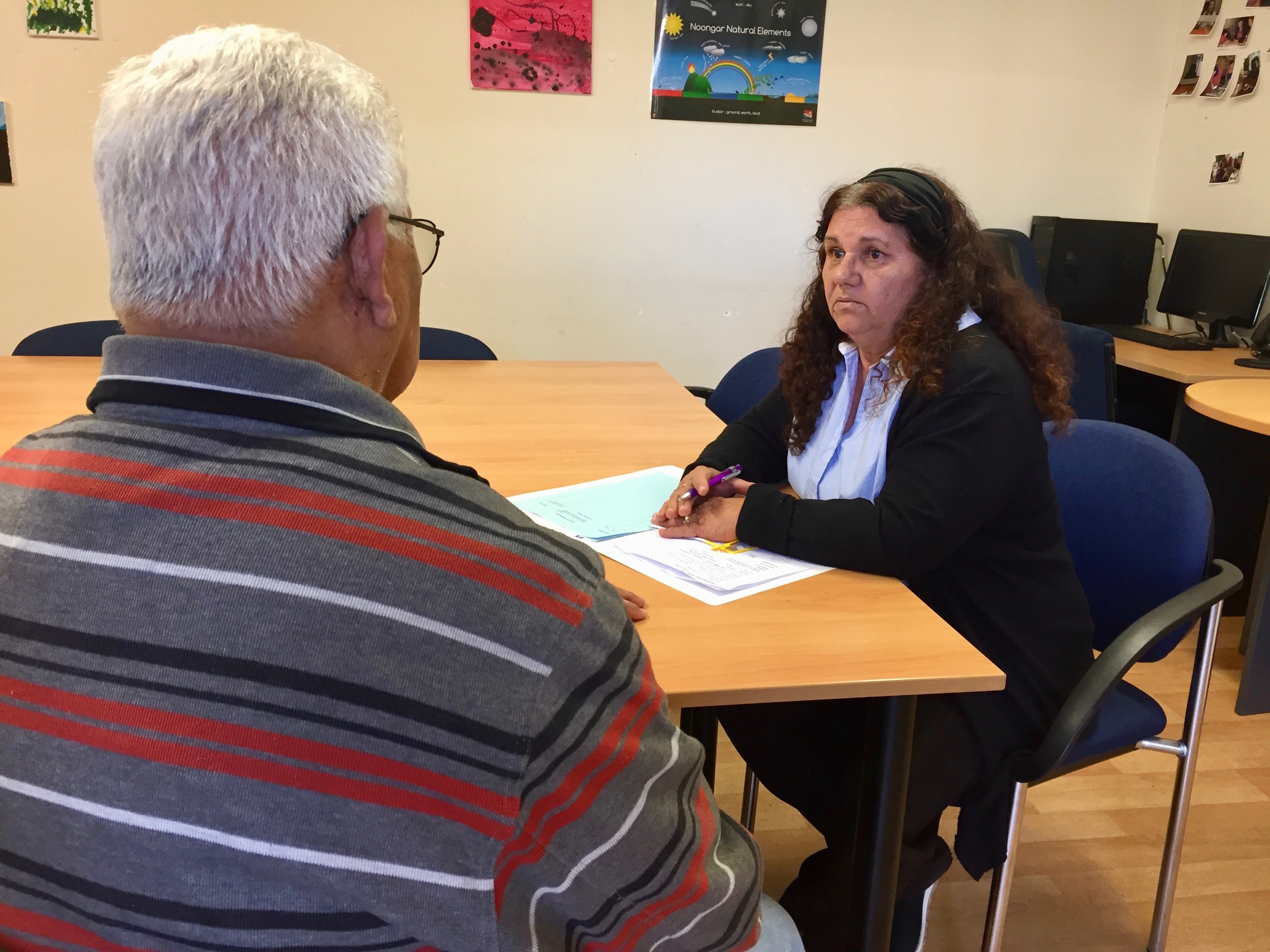 For Aboriginal health workers in Perth, the absence of culturally appropriate aged care is a looming disaster.

Averil Scott is a program manager and counsellor with the Women’s Health and Family Services.

“(Services) don’t employ Aboriginal workers, and the workers that are there, I can’t see them having cultural awareness training. They’re not culturally aware of Aboriginal languages, body language, sign language, so the communication is lost between them.”

“It’s not welcoming, a lot of places don’t have connection to land, culture, water. Rooms aren’t big enough for families to visit … so the environment they’re placed in, isn’t right.” 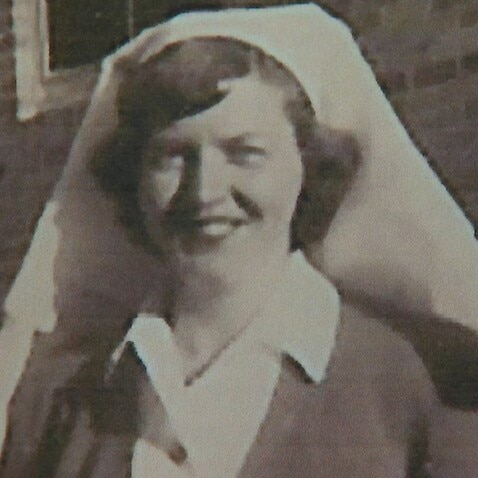 Many among those now needing aged care were part of the Stolen Generations.

In 2015, an estimated 13,800 Aboriginal people aged 50 and over were found to have been removed from their families, representing 14 per cent of all Indigenous Australians in that age bracket.

“A lot of families won’t consider [aged care] because they won’t want to put their older family members into places where they feel they’re going to be abused,” Ms Scott said.

The forced removal of Aboriginal children from their families during the twentieth century is today a major barrier to accessing mainstream services.

“With a lot of the Aboriginal people going into aged care now, they’re coming from that system of being institutionalised,” Ms Scott said.

“Putting them into aged care is like re-institutionalising them … they have no say in what they do, no say in where they go.

“They lose their voice, the same as when they were taken to the homes and missions.” Putting them into aged care is like re-institutionalising them … they have no say in what they do, no say in where they go.”

For many Aboriginal families in Perth, the decision to place a loved one in aged care is only the first hurdle.

Two months ago, Kitty Hansen was left with no option after her mother was diagnosed with dementia.

“We took mum to the hospital, they realised she had dementia,” Ms Hansen said.

“They said she needed 24-7 care and supervision”.

But finding a suitable place to spend her mother’s final years proved to be an ordeal. 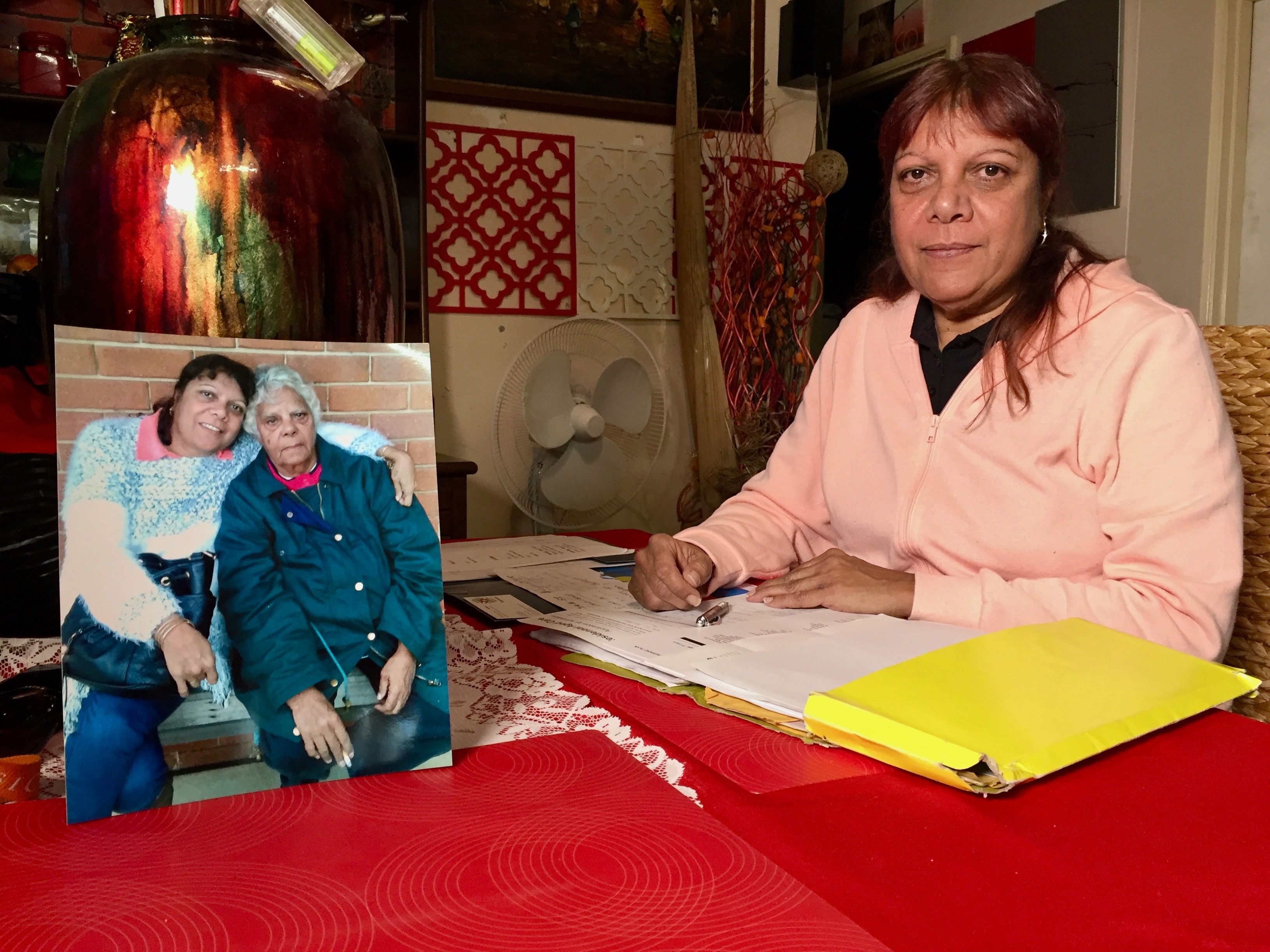 “The process is unbelievable. The paperwork, filling out the paperwork, there is just so many questions,” Ms Hansen said.

“We can’t find anything suitable as of yet, so we are just leaving her in transitional care at the moment.”

Ms Hansen said she would like to see more culturally appropriate places on offer.

“In the aged care where my mum is, she’s the only Aboriginal lady in there that I know of,” she said.

“Personally, for my mum, if she could see another Aboriginal worker or Indigenous worker, she would be more relaxed. It’s a family thing, seeing another indigenous person there, it would be nice.”

A place to call home

While the royal commission continues, some in Perth are working to create changes of their own.

Plans are underway for an Aboriginal Aged Care Community Hub in Perth’s southern suburbs, a holistic service for primarily Noongar people to live in towards the end of their life.

“There are other cultures that have their own aged care facilities, where the elders are among their own community,” Langford Aboriginal Association’s Angela Ryder said.

“We don’t have that luxury, where our mob can be together in one facility and be culturally safe, have Aboriginal people that are caring for them.” 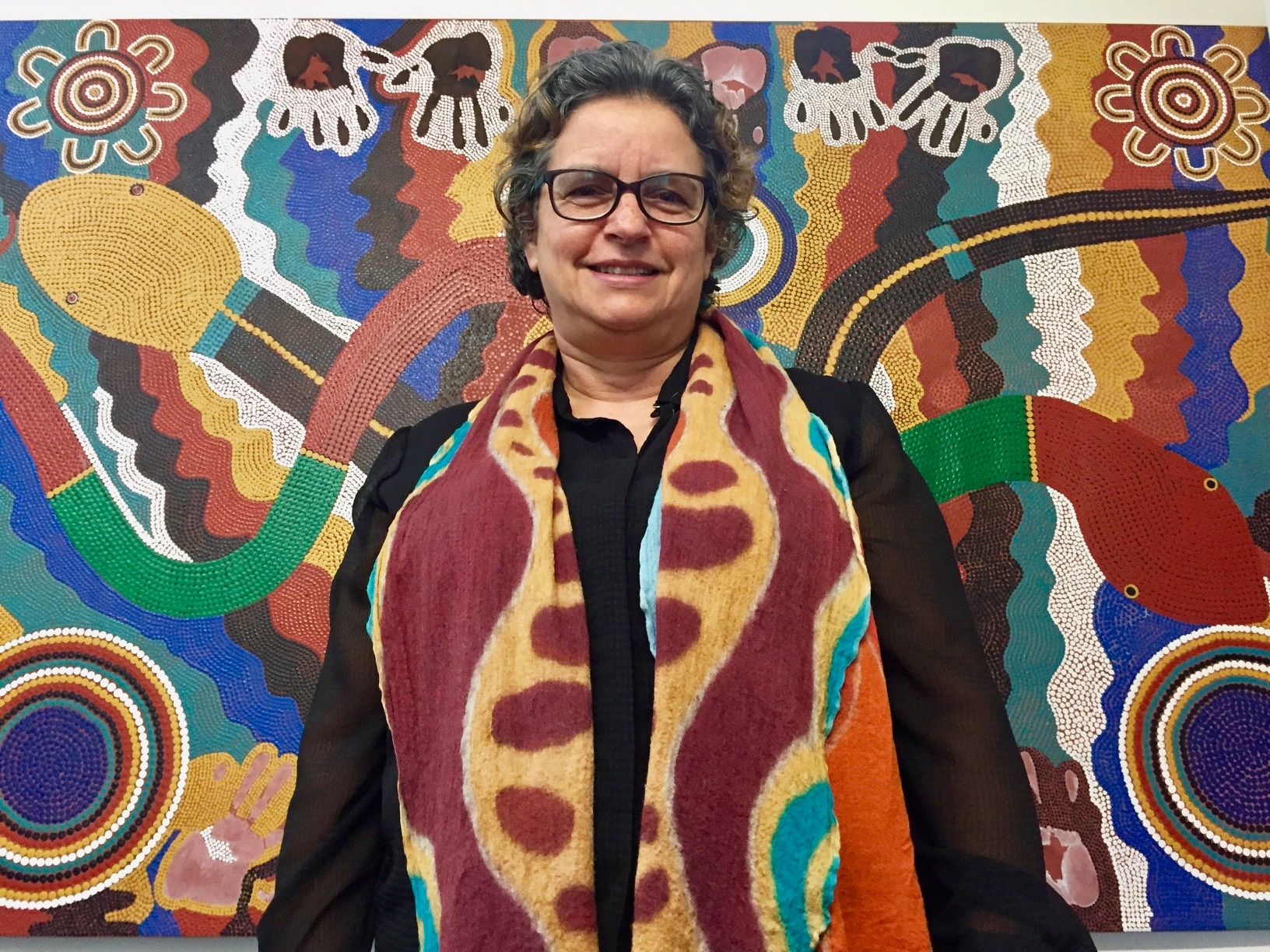 Ms Ryder said the project would combine independent and assisted living in a communal space where grandparents could continue passing down language and traditions.

“We’re all about family, we’re all about community and being together. Having elders in an aged care facility where there’s no contact with children and family is not something that we want to promote,” Ms Ryder said.

“We want to have a facility that promotes that connection with our young people and that learning, from one generation to the next.”

After receiving private donations for a feasibility study, the group successfully lobbied former minister for aged care and current Minister for Indigenous Affairs Ken Wyatt to provide $250,000 in funding to support the planning stages.

Ms Ryder said both state and federal governments should step up, and assist with the search for land to build the centre.

“I would like to see governments come together and provide the land for this facility, and fund the staffing,” she said.

“We’re not asking the government to give us land. We’re asking them to give our land back to us”.

For elders like Ms Riley, it’s a place that could provide a way to stay connected to her culture later in life.

“All I would like is to find a companion … I just want friendship, you know?” she said.

“I need someone to talk to, like an older person like myself. I used to have a lot of friends close around, but they’ve all passed.

To find out more about the Aboriginal Aged Care Community Hub visit: https://www.facebook.com/pg/aacchwa/

To read more about the project visit: https://www.fortisconsulting.com.au/wp-content/uploads/2019/05/20190509-LAA-DOH-Concept.pdf

As the representative for Partners in Culturally Appropriate Care (PICAC) in Western Australia, Fortis provides a range of customised services to improve the capacity of aged care services and their personnel, respond to the unique needs of people from culturally and linguistically diverse (CaLD) backgrounds.

Fortis, as part of the national PICAC network, empowers workforces in the aged care sector to develop the capabilities to provide culturally and linguistically appropriate care.

We improve the capacity of aged care services to respond to the differing needs of older people from culturally and linguistically diverse (CaLD) communities through:

– Partnering with organisations to identify and address unique needs that will help deliver better practice in culturally appropriate care.
– Customised training to all levels of an organisation
– Quality resources and relevant research

An overview of the training services, partnering approach, events and the available resources follow.